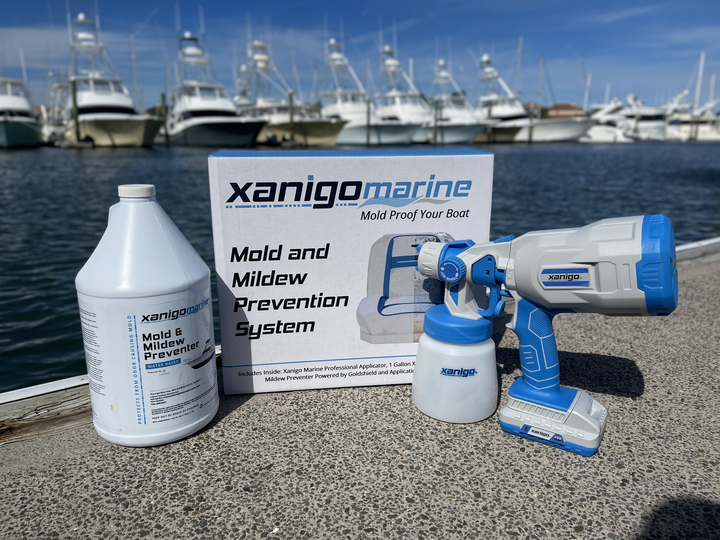 “Some customers have salt and sun problems, 100% have mold issues.”

Like many boat detailers, Alex Matos is the owner / operator of his business May River Boat Detailing. He refers to his business as a “one man show” but admits he couldn’t do without the help of his wife scheduling and admin work. As a Florida Keys native he grew up fishing, scuba diving, and boating. His love for the water and his country prompted him to join the United States Navy in 2010 where he was a boatswain's mate and later qualified as a master helmsman. As a boatswain's mate he learned how to care for the ship. Which means he is always focused on properly caring for his client’s boat as if they were his own.

Alex found Xanigo Marine because he was challenged by a center console boat that he would have to remove mold from the caulking around the center console over and over again. He tried Xanigo Marine and it never happened again. He has been thrilled with the performance. Alex typically works on smaller boats, maybe on average of 24ft or so. When explaining what he does he stated, “The system is so fast and easy. On a 24ft boat it takes me about 4 minutes to use the mold preventer with the sprayer. Previously it would take hours to remove the mold if it kept coming back.” It makes us happy that Alex recognizes the ease and power of the Xanigo Marine System and the fact that it doesn’t just make a happier client, it can save a detailer a significant amount of time.

So far, Alex says he has treated 30-40 boats with Xanigo Marine Mold and Mildew Preventer. It has become an important part of his business. Alex stated with a smile, “"Adding mold prevention has allowed me to separate myself from the competition in my area. There's no one else out there that offers it so it makes it that much easier to get the customers I'm looking for. I've tried other products but they're all just vinyl protectors that protect from the sun. Xanigo Marine is the only solution I've found that actually prevents mold growth- and that's huge!”

In Beaufort County, SC and want to contact May River Boat Detailing to have Alex prevent mold on your boat? Find him and other local detailers HERE.